A farmer hired two workers for his fields, but before he sent them out for the day’s work, he told them he had just one rule: don’t steal any fruit. The two agreed to obey the rule.

After the day was over, the two workers came in to report to the farmer. He asked them if they had stolen any fruit, and immediately their conscience forced them to tell the truth.

“Yes, we did. We ate some when we got hungry,” they said. The farmer replied,”Ok, here is your punishment. I want each of you to go pick 10 of your favourite fruit and come back to me.”
The man couldn’t believe their ears. This seemed more like a reward than a punishment!

After 15 minutes, the first thief came back with 10 cherries. The farmer promptly told him that as part of his punishment, he would have to stuff each cherry up his nose. The thief was upset about this, but he knew he had done wrong, so he slowly began to push the cherries up his nose one by one.

As he was working on the third cherry, he began to laugh hysterically. The farmer asked him, ” What’s so funny?”
The thief replied, ” The other guy is out there picking watermelons!” 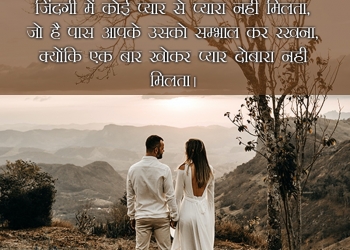 Two Line Love Status, 2 Line Romantic Shayari In Hindi.– Love Is The Most Beautiful Feeling In The World. Love...