Home » Humour » Start your day with a smile

Start your day with a smile

Mother asks little Johnny, as they wait for the bus, to tell the
driver he is 4 years old when asked because he will ride for
free.

As they get into the bus the driver asks Johnny how old he is.
“I am 4 years old.”

“And when will you be six years old?” asks the driver.

“When I get off the bus,” answers Johnny.

essays. She was working late one night, and as the

The next day a student came to her after class with

an essay she had corrected. “I can’t make out this

The teacher took the paper, and after squinting at it

for a minute, sheepishly replied, “It says that you

A visitor from Holland was chatting with his American friend and
was jokingly explaining about the red, white and blue in the
Netherlands flag.

“Our flag symbolizes our taxes,” he said. “We get red when we
talk about them, white when we get our tax bill, and blue after
we pay them.”

“That’s the same with us,” the American said, “only we see
stars, too”

Stressing the importance of a good vocabulary, the teacher told
her young charges, “Use a word ten times, and it shall be yours
for life.”

“Your child has started growing up when he stops asking you
where he came from and starts refusing to tell you where he’s
going.”

The doctor’s office was crowded as usual, but the doctor was
moving

at his usual snail’s pace. After waiting two hours, an old man
slowly

stood up and started walking toward the door.

“Where are you going?” the receptionist called out. 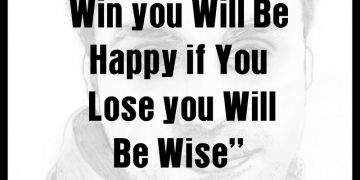 Take risk if you win you will be happy if you love you will be wise. Rj Raunak Whatsapp Status...